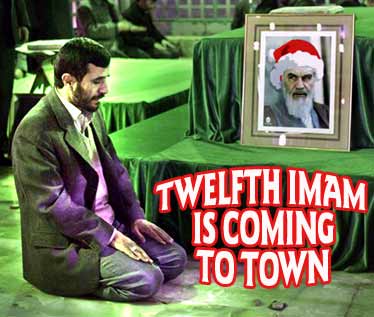 The blew was my response to a thread discussing if Obama might be the 12th Iman.

However, like Hitler, Mao, Stalin, Castro,…. I believe Obama is an evil ego-maniac who is a great danger to us. Like those ego-maniacs, Obama has the desire to rule a One Government World — and like Hitler, Mao, Stalin, and Castro (all who murdered a big percentage of their citizens) Obama is fully prepared to crack some eggs (kill his enemies) when the time comes. Remember it was William Ayers who jump started Obama's political career. Ayers advocated that 20,000,000 or more Americans would be too stubborn to be re-educated for his Communist dream — and would have to be eliminated as a necessary casualty of Communism. Every country who were converted to Communism had these necessary casualties — they see it as a simple business decision of the success of the Communist conversion. I'm sure he doesn't see himself as a messenger of any religion — because like Hitler, Mao, and Stalin — he feels he's bigger than any religion.

Most laugh at me when I say this, feeling like the murders of political enemies in the 1930s (Russia), 1940s (Germany), 1950s (China & Korea), 1960s (Viet Nam, Cambodia, Cuba) could never happen now. People — we live in more dangerous times now than then. For instance — I could safely walk the streets as a 5-year-old kid in 1960, but I can't let my 12-year-old daughter to go down the street to the public pool in my upscale neighborhood 50 years later. The crimes now make anything that happened in the 1930s to the 1960s in the US pale in comparison. Our culture has hardened and degenerated to total scumbags (as what happened to the Roman Empire) — accepting things like homosexuality and abortions, loss of patriotism and loyalty, loss of personal responsibility and family — to where I think the United States is more now ripe for a Hitler than ever before.

All of that said, and with the topic of the thread being the 12th Iman — the 12th Iman is of great danger to us because of crazy Islamic radicals like the leaders of Iran believe it — and want the Earth to end in a sea of blood, so the 12th Iman can return and take them to Paradise. These are the same idiots that Obama is doing nothing to stop their obtaining the tools to bathe the Earth is a sea of blood. So I guess Obama is in a way related to the belief of the 12th Iman, as he (the Americans are always expected to clean up the World's messes) is the one person expected to save the world from Iran having the tool (Nukes) to end the world. Iranian leaders believe in the 12th Iman and want the end of the world to come soon — and they're building the tools to make it happen.

We are facing big trouble because of apathy. People stood by and would not believe that Stalin, Mao, Pol Pot, and Hitler were systematically murdering millions of people they disliked — and that enabled them to get away with it for so long. Americans are apathetic as to what is happening in our world (here and abroad) — either not believing it is happening; or if they believe they're either afraid of speaking out, don't care enough to speak out, or assume that others we come in an save us before it is too late. Cowards or idiots — pick one.

Russians also felt this way — as did Cubans, North Koreans, Chinese, Germans, Italians, Spanish, … when they had ego-maniacs taking away their freedom — and then killing their citizens. Laugh now — but you will someday be crying.